Hearty Movies for the Quarantined Soul

Everything dependable is adrift this year. But you know what we can always count on? Movies. In lieu of the traditional family event this year, make some mashed potatoes and enjoy our staff’s favorite Thanksgiving stories!

There aren’t a lot of Thanksgiving movies out there, most likely because it’s a strictly American holiday, focused primarily on food. In fact, the whole premise it’s based on, English settlers sharing a fall bounty with the native population they’re displacing is squirm-inducing, not a lot unlike the fact that a lot of religious holidays have their roots in pagan traditions.

Nevertheless, I’m a sucker for a holiday based on food, family and gratitude.

Peter Hedges wrote and directed a small, low-budget film in 2003 that featured a talented cast of Patricia Clarkson, Oliver Platt, Alison Pill, Derek Luke and a pre-Tom Cruise Katie Holmes. It has the characteristics of stories that I love: circumstances that pull us together because at the core, we’re more alike than different, family dynamics, humor and most of all, that doing the right thing is worth it.

Black sheep daughter Katie Holmes’ suburban family are coming to her gritty urban apartment for Thanksgiving. Equal servings of judgement come from her family traveling into the city and from April’s neighbors as her vague plans to make dinner go awry and she seeks their help. Nothing and no one is as it seems. The bonds created, the changes of heart that result, culminate in a Thanksgiving meal both surprising and healing. With music by Stephin Merritt and The Magnetic Fields, this is a Thanksgiving tale I revisit every year. The older I get, the more truth I see in each character and am reminded that some relationships, no matter how damaged, can be worth redeeming.

Not only is Ang Lee’s The Ice Storm (1997) one of my favorite Thanksgiving movies, but it’s one of my favorite 90’s movies. It takes place in Connecticut, Thanksgiving 1973, at the end of an era: Nixon is almost out of the White House and the sexual revolution is coming to its close. A strained, emotionally distant family reconvenes for Thanksgiving when an ice storm hits.  It’s a coming of age and a family drama that reminds us that we hurt the ones we are closest with (even Ari Aster credited some of its elements and tone as inspiration for Hereditary). The Ice Storm may be a little heavy-handed at times, but it is worth a watch even if just for the performances. One of my personal favorites, Kevin Kline stars alongside Sigourney Weaver and adolescents Tobey Maguire, Elijah Wood, Christiana Ricci, and Katie Holmes. It may be hard not to be nostalgic this Thanksgiving for the ones past, so why not lean all the way in and head back to 1973.

Available to rent wherever you stream movies (Amazon Prime, iTunes/Apple TV or Youtube)

I know what you’re thinking…since the holidays look a bit different this year, how will you ever be able to replace the hustle and bustle and stress of traveling to see love ones on Thanksgiving Day?! Well you’re in luck! You can still experience all that and more in less than 2 hours from the comfort of your home with Planes, Trains and Automobiles!

The year is 1987. John Hughes has written and directed 4 films about teenagers and Steve Martin is mostly known for his goofy stand-up-esque characters. They both decided to try something a little different. They grouped up with the incomparable John Candy and it’s a “recipe” for a Thanksgiving classic (and the start of Steve Martin’s transformation into classic film dad)! Ingredients also include: sight gags, classic quotable quotes, the highs and lows of the holiday season, snow, some tears, a sprinkle of (Kevin) Bacon, and a whole lot of heart.

So hunker down, bundle up, and have a Thanksgiving adventure with Del & Neal – aka the perfect mismatched pair of travelers (from personality down to wardrobe) that prove that Thanksgiving isn’t just about food. It’s about family, strangers that can become family, and being thankful for what you have…even if it’s just 2 dollars and a Casio. 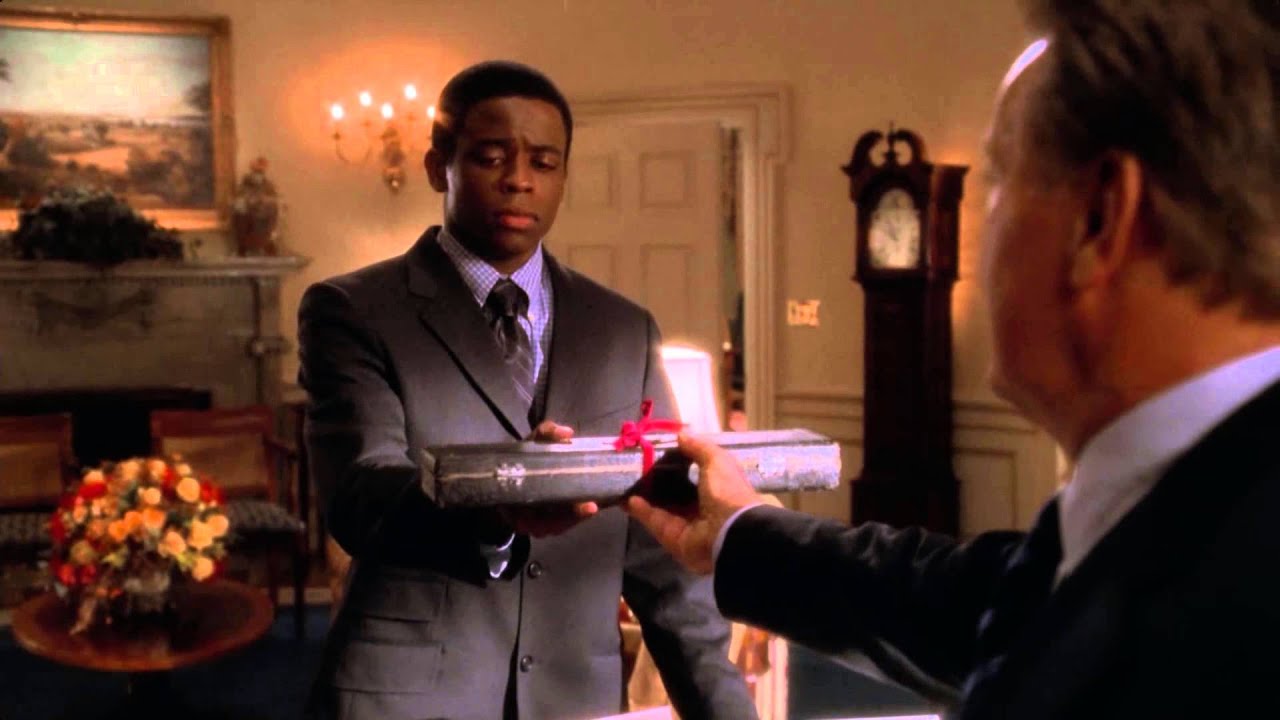 Is this a movie? No. Intelligent minds may disagree, but things that aren’t movies can occasionally be good. If you really are movie purist, I invite you to think of this as a long short.

You know what is dependably mediocre? Thanksgiving-themed TV episodes. Someone gets drunk, unresolved family issues, uh-oh they dropped the turkey where?! Pan shot around a table that bears no marks of the earlier chaos to show resolution, and scene.

Shibboleth is not that, as you may have guessed from the title. (For one, the misplaced turkeys are alive.) This episode covers the White House staff in the days leading up to and including Thanksgiving in the second year of the President’s first term. They deal with a small crisis over religious refugees, a circus of a Rose Garden ceremony, and an impossible search for a German knife. (and hey, what if Pilgrims could solve crimes)

This is both the rare good not-movie and not-bad-thanksgiving-episode. I don’t really think you need to have seen any of The West Wing before to enjoy this: the “previously on the West Wing” recap is a brief intro of the characters, and the premise of the show is dead simple. (He’s a president, you see, and he’s got people who work for him in the West Wing)

Aaron Sorkin has his flaws, but he’s exceptional at writing episodes that balance humor and heartstrings in perfect proportions. This script is one of the best examples of this in his entire career. Go enjoy it on Netflix. If you don’t cry at the knife part, you’re made of more solid stuff than I.

(also, bizarrely for a show that is obsessed with details, they get the date for Jamestown wrong. No one’s perfect!)